Another Drug Record for Afghanistan 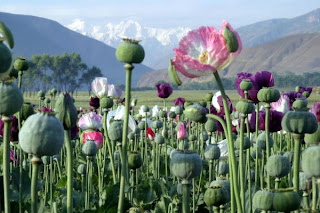 In addition to being the world’s leading producer of opium, Afghanistan has now become the largest producer of hashish, according to the first ever cannabis survey released by the United Nations Office on Drugs and Crime (UNODC) earlier this month. Again, the US invasion is behind the new record.

The 2009 Afghanistan Cannabis Survey revealed that there is large-scale cannabis cultivation in half (17 out of 34) of Afghanistan’s provinces, covering a total area of 10,000 to 24,000 hectares every year (lower than opium cultivation, which covers 125,000 hectares). Afghanistan’s crop yield is so high at 145 kg of resin per hectare that it overtakes other leading producers like Morocco, where cannabis covers a larger land area but whose yield is lower, at 40 kg/ha. It is estimated that Afghanistan produces 1,500-3,500 tons of hashish annually, an industry involving 40,000 households. The total export value of Afghan hashish is still unknown, but its farm-gate value—the income paid to farmers—is estimated at about US$ 40-95 million, roughly 15% that of opium ($438 million in 2009).

Abundance of supply fuels demand, making hashish the most commonly used drug in Afghanistan, whose more than 500,000 users are mostly men. Marijuana, the other drug that can be obtained from the cannabis plant, is a minor product in Afghanistan as compared with hashish. Farmers choose to grow cannabis mainly because it sells at a higher price than licit crops and even opium, fetching over $3,000/ha compared to $2,000 for opium and $1,000 for wheat. Many farmers grow both drugs but opium is still more important, in part because cannabis has a short shelf-life and is a summer crop (when less water is available for irrigation).

The history of the two plants and the ways in which they have supported US foreign policy in Afghanistan and Pakistan is similar, although opium’s impact has been more important in scale. In the 1960s, westerners travelled to the Orient on the “Hippie Hashish Trail”, passing through Istanbul, Delhi and Kabul. They found Afghan hashish of such a high quality that they started smuggling it back to their home countries, through syndicates such as “The Brotherhood of Eternal Love”, a famous American group. This popularised hashish consumption in the West and generated an enormous demand which Afghanistan and Pakistan filled starting in the 1970s.

King Zahir Shah (1933-1973), under whose rule cannabis cultivation was allowed in Afghanistan, even encouraged farmers to use fertilizers to boost exports to the West, before outlawing cultivation in the early 1970s under pressure from Richard Nixon, who had just launched his War on Drugs. The Afghan police succeeded in eradicating a lot of the cannabis crops, but conveniently, cannabis farms controlled by Afghan government officials were spared, a bias reminiscent of today’s situation. The 1979 Soviet invasion further disrupted cannabis cultivation, which partly moved to Pakistan’s tribal areas, where transformation into hashish and export took place, just like poppy cultivation and heroin processing. The hashish trade was used by the US-supported mujahideen to finance their fight against the Russian invaders.

The Taliban regime used opium to finance itself in the 1990s, but outlawed hashish production, some say because hashish was consumed by Afghans whereas opium was for the unbelievers in the West, although the real reason had more to do with the fact that there would have been an uprising against the Taliban if farmers had not been allowed to grow poppies. The Taliban ban on hashish was extremely effective—the crop persisting only in a few places—just like their later ban on opium in 2000-2001. But the 2001 US invasion changed all that, leading to the spread of cannabis to new areas, especially from 2005 onwards, according to independent experts and UNODC.

US/NATO policy played a role in stimulating cannabis and hashish production in several ways. First, the invasion itself removed the Taliban’s ban and empowered Northern Alliance and other drug lords who received the necessary protection to continue and increase their production and trafficking of cannabis and opium, up to this day.

Secondly, cannabis cultivation has also been stimulated by poppy eradication campaigns, which led some farmers to simply switch to cannabis. The latter has been sometimes safer to grow, having been targeted even less than poppies, to which the US and NATO have not paid much attention in any case.

Thirdly, US/NATO’s militaristic policies have not helped to contain the spread of hashish production: the UNODC report notes that “villages that had not received agricultural assistance were slightly more likely to have cannabis cultivation.” The problem is that while the US spends about $1 million a year to support the deployment of one American soldier in Afghanistan, an average of just $93 in development aid has been spent per Afghan per year over the past seven years. Put differently, the US alone has spent $227 billion on military operations in Afghanistan since 2001, while all international donors together have spent less than 10% of this amount on development aid.

US/NATO allies in Afghanistan continue to benefit from the hashish industry, as confirmed to this author by a UNODC official involved in drafting the report. The document states that “there is a clear geographic association between opium and cannabis cultivation at the provincial level” as well as at the trafficking level: “a large proportion of cannabis traders also trade opium.” This means that many members of the police, local militias, and ultimately, government officials supported actively or tacitly by international troops, do benefit from hashish production.

Yet, the American government and UNODC continue to have their eyes set on the drugs-Taliban connection. For instance, UNODC chief Antonio Maria Costa declared that “All drugs in Afghanistan, whether opium or cannabis, are taxed by those who control the territory, providing an additional source of revenue for insurgents”—and what about sources of revenue for government forces?

The Taliban-cannabis association is also emphasized by repeating that over the last few years, cannabis cultivation has shifted away from the north to the south (just like poppies), where the insurgency is raging. Costa can therefore state: “A concentration of cultivation in the southern part of Afghanistan shows that the Taliban and those insurgents that control the southern parts of the country are not only funding themselves by trafficking opium but also by trafficking cannabis. It’s the same area.”

True, the Taliban tax and control part of the trade in cannabis products. But as the UNODC report shows, cannabis trading centers are spread all over Afghanistan, which means that even though crops are concentrated in the south, hashish is traded everywhere and exported following similar routes as opium and heroin, to Pakistan, Iran, and Central Asia. Therefore, although precise numbers regarding the total value of the cannabis industry in Afghanistan are not available yet, revenues are tapped by many segments of Afghan society, from farmers and police forces to warlords and insurgents.

This might give pause to the many pundits who argue that we must fight a war on drugs in order to cut the Taliban’s finances. Wouldn’t eliminating opium and cannabis crops also cut many other Afghans’ income, including government forces’, weakening them in their fight against insurgents? This question has been pondered by Dutch marijuana shop owners post 9-11, who have wondered if smoking Afghan hash amounts to supporting terrorism. One of the owners, Nol Van Schaik, gave an interesting answer: “If the Northern Alliance are the people on the ground who are going to defeat the Taliban, people who want to defeat the Taliban should buy as much of their hash as they can,” Van Schaik said: “It’s a patriotic duty to buy their hash.” Whatever one thinks of this solution, it undermines mainstream experts’ claims that ignore the fact that those they support are also involved in drugs. There are good reasons to eradicate drugs, but weakening the Taliban may not be the most logical one.

In fact, a double withdrawal could be the best solution for Afghanistan: get international troops out of the country to reduce locals’ grievances that fuel the insurgency, and treat drug addicts in the West and Afghanistan to reduce the demand for narcotics.

One must realize that the Illegal Drug Business is controlled and licensed by the Intelligence Services, CIA, and they make their money on every level of the business, Production, Transportation, Distribution, Money Laundering, and the Drug War, Police, Prosecutors, Judges, Jailers, Prisons, Prison Industries, Parole and a population that is broken and splintered.

Marijuana should be legalized and those responsible for this misdirected policy should be brought to justice. The system is broken and it is time to fix the problem. All of these problems can be traced to the Perpetual War Doctrine and Empire Building. War + Drugs+ Killing + Profit + Empire = DEATH. It is time to stop and Bring all the War criminals to justice.


Posted by Robert Reckmeyer at 7:04 AM