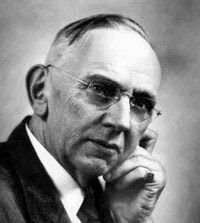 I first read about Edgar Cayce, as a young seven year old boy, after finding a book on my mothers Metaphysical Book Shelf. The Sleeping Prophet totally resonated with me and encouraged my interest in all things Metaphysical. I was intrigued by his ability to see the past and also look into the future. His ability to diagnose health problems and the proper natural remedies was stunning in its benefits for the afflicted.

Edgar Cayce spoke of this age and the great Earth changes that are to come upon us. His warnings to all of us are here for all to read. It is incumbent on all of us to understand; we do influence the outcome and the severity of the Earth Mothers Birth Pangs. If we can send out a resonance of Love and Compassion, Empathy and Peace, it will lesson the pain of birthing this new frequency for our Hue-man Race and our Planetary System.

We are to be vigilant in our search for truth and our ability to understand the Grand Manipulation of a Trans dimensional Reptilian [Serpent] Race who are not of the same spectrum as our Hue-man family. They are of the animal kingdom and though they are brilliant in their ability to engineer high technology and manipulate DNA at the end of the day they are still not like us.

One might ask what this has to do with Edgar Cayce? I would suggest that out of Russia, as spoken by the Sleeping Prophet, will come the Hope of the Hue-man Race to make a stand against this Trans dimensional Usurper and that Hue-man-ity will triumph over this evil negatively aligned race. Our freedom is dependant on those who love freedom and are willing to make a stand against any that work to keep us enslaved.

Our Planet Earth will experience all that Cayce Predicted and it is on us, in this generation, to help in the Grand Awakening of Hue-Man-ity to the Truth. Our Planet and our Race has been manipulated, lied to, hurt and abused for long enough, and now, in our generation, it is time to throw them [and all their Elite Bloodline helpers] off our backs.

The Illuminati and the Secret Societies of this world have sold all of us out for Wealth and Power. I can remember the Spiritual Masters who were offered the same and turned all of them down. The Serpent Race is cunning like a snake. They evolved from the Serpent and know how to fool, manipulate, and conquer other races throughout the Galaxy. But they are not infallible and we will restore our system to a Positively Aligned Loved Based System as Spoken of by the Prophets. This I know from an intuitive Heart Based Perspective.

Let us join, with love in our hearts and encourage all free thinking people to support this great endeavor.

"Through Russia, comes the hope of the world. Not in respect to what is sometimes termed Communism or Bolshevism -- no! But freedom -- freedom! That each man will live for his fellow man. The principle has been born there. It will take years for it to be crystallized; yet out of Russia comes again the hope of the world,"

This is my Hope and Prayer.

He predicted two World Wars, their start and end dates, the economic crisis in 1929 and the following economic growth in 1933. He also foretold the defeat of Germans at the Kursk Bulge, the fall of fascism and the victory of the USSR in the Great Patriotic War. They called him the sleeping prophet, as he made his predictions while asleep. He would close his eyes, fall asleep and begin to prophesy. When awake, the prophet would remember nothing of what he had spoken about at night.

This article is about one of the most famous predictors in the history of mankind – Edgar Cayce (March 18, 1877 – January 3, 1945). In the west he is no less famous than Vanga in Eastern Europe. Having no medical education, Cayce could successfully diagnose and cure people. Last year saw 130 years since Cayce’s birthday.
A month before his death, when the Red Army victoriously walked through Europe, the prophet predicted the fall of communism and the collapse of the Soviet Union. He also said that Russia would successfully meet the after-communism crisis “by friendship with the nation which trusts in God even on its banknotes. "Through Russia, comes the hope of the world. Not in respect to what is sometimes termed Communism or Bolshevism -- no! But freedom -- freedom! That each man will live for his fellow man. The principle has been born there. It will take years for it to be crystallized; yet out of Russia comes again the hope of the world," he said.
He also believed that those nations who would be in good relations with Russia, would live better, gradually changing the whole world for the better. Thus, Cayce’s visions came true. The USA and the U.S. dollar in particular really left a mark on the post-perestroika Russian history; and those countries that maintain friendly relations with Russia live perfectly well thanks to Russian oil and gas. But what would happen next?
Not so long ago many experts said that Cayce’s forecast about the revival of the Soviet Union in 2010 was absurd. However, this prophesy is gradually becoming true. Belarus is known to be the first candidate for the alliance. Then, as modern political scientists think, it could be followed by Kyrgyzstan, Eastern Ukraine, Armenia and Kazakhstan. Even freedom-loving Georgia will possibly take a step towards friendship with Russia. It is worthy of note that legendary prophetess Vanga also said that Russia would be a great empire again.

But other Cayce’s predictions are not so optimistic. He predicted the growth of political power in China. He envisioned the future where China would be “the cradle of Christianity as applied in the lives of men”. No Third World War is to take place according to his forecasts. Something more awful is in store –natural cataclysms. In 1930 Cayce prophesied the global warming, although nobody thought about climate changes at that time.
“Where there has been a frigid or semi-tropical climate, there will be more tropical weather, and moss and fern will grow,” he indicated, “New York, Connecticut and many territories of the East Coast will be seriously disturbed, along with many territories of the West Coast and the central part of the United States. Los Angeles and San Francisco will be among those that will be destroyed. The waters of the Great Lakes will flow into the Gulf of Mexico.”

Climatic and seismic cataclysms are to shake the whole planet and, consequently, change it greatly, Cayce predicted. But Russia will suffer least of all. It will lead the reviving civilization with the centre in Western Siberia. But the time when all the above-said events should happen is already wrong: Cayce assigned the end of the 20th century for all these catastrophes. But it is still possible that he defined the tendency itself quite right. Scientists say that in about ten years the glacier melting in Greenland and Antarctica can provoke violent tectonic activities such as volcanic eruptions, earthquakes, tsunamis and floods. Cayce’s predictions remind those of Vanga’s at this point. In 1979 she prophesied that everything would thaw like ice and only Russia would be left untouched.

Posted by Robert Reckmeyer at 8:05 AM