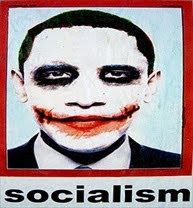 Get the Obama as Joker for your own poster campaign. Please remember to post only in public commons spaces and not on government or private property.

The Obama Joker posters are still spreading virally across the country and the world as the authorities panic at the power of the grass roots to reach the masses almost in an instant, flying in the face of an establishment media which is controlled by a handful of powerful corporations.
The success of the Obama Joker poster campaign, started anonymously in Los Angeles and amplified after it was incorporated into an Infowars contest, can be measured against the achievements of America’s foremost contemporary street artist, Shepard Fairey, who was responsible for designing the Obama “HOPE” flyers that were posted in public places before the 2008 presidential election, an image labeled “the most efficacious American political illustration since ‘Uncle Sam Wants You’” by New Yorker art critic Peter Schjeldahl.

Fairey admitted that he was in contact with the Obama campaign team following the release of the early versions of his poster, and that they directed him in creating new posters. The original poster carried the word “PROGRESS,” but this was later changed to “HOPE” on the insistence of the Obama campaign, along with two other versions which read, “VOTE” and “CHANGE”.

President Obama himself later wrote to Fairey expressing his gratitude to the designer for putting out the images and also lending support for people who were posting them in public, an action which attracted little attention from the authorities, who on the contrary reacted hysterically to the anti-Obama Joker posters and immediately sought arrests and denounced the flyers as “vandalism,” characterizing them as some kind of assault on “victims” of a dastardly crime.

Fairey was largely dismissive of the Obama Joker poster, rather pedantically arguing that it wasn’t grammatically correct because the word should have been “socialist” not “socialism,” but he was forced to admit that the posters sent a powerful message.

“The artwork is great in that it gets a point across really quickly,” Fairey told the L.A. Times. “The Joker is a sinister, evil character that can’t be trusted. And if they want to make that parallel with Obama — bam.”

It took the best part of a decade for Fairey’s iconic “Andre the Giant Has a Posse” street art to go viral, but in the Internet age, the Obama Joker image has already trumped it in a matter of weeks.

The flyers have already hit Wall Street, Tokyo Japan, Berlin Germany, and hundreds of towns and cities across America.

Attempts on behalf of authorities and the media to propagate the contrived hoax that the majority of people are “disgusted” by the image have been proven fraudulent by polls showing that most people support the first amendment rights of people to post the flyers.

Likewise, efforts to chill free speech and intimidate people from exercising their first amendment have merely been met with an intensified effort to post more and more of the Obama Joker posters.

Early claims that the poster had racist overtones were shot down when images were unearthed of George W. Bush depicted as the Joker, as well as a blood-sucking vampire. Lazy attempts to play the race card in an attempt to dismiss the grass roots power of the Obama as Joker meme failed completely.

Indeed, caricatures of political figures have been part of the fabric of American society for hundreds of years. Satirical lampooning of authority figures by means of stylized cartoonish parodies is an American tradition, and has nothing whatsoever to do with racism.

The success of the Obama Joker poster campaign, concurrent with Obama’s rapidly sinking popular approval figures, is proof that even in the face of a locked down corporate media owned by a handful of interests, the people can still communicate with the masses and obtain instant recognition by means of viral campaigns coordinated through the alternative media and the Internet.

We either live in a free country with the right of free speach or we live within a false construct that is based on a dog and pony show. Obviously Obama is having to face the fact that he sold us a false set of goods. Obama is a Pupet of Wall Street and does not have the best interest(s) of the people high on his agenda.
The poster represents the fact that "We the People" don't appreciate a leader who says one thing and does another. He has betrayed the working man and sold us to the Wall Street Banksters.