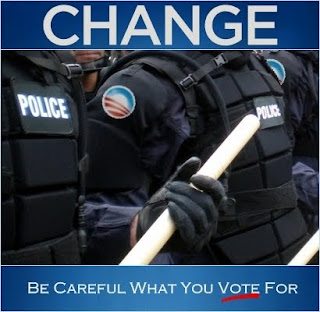 Members of all branches of the United States Military will soon be facing a most critical decision. The European Union Times is reporting here that Obama is using the deployment of additional troops to Afghanistan to cover for the movement of some 200,000 troops, presently on duty in countries other than Iraq and Afghanistan, to USNORTHCOM to prepare for the “expected outbreak of Civil War within the United States before the end of winter.”

It would appear those who call themselves “public servants” believe the people they supposedly serve have become dissatisfied with their job performance and will resort to some form of civil disobedience, which will necessitate military intervention. According to the article, Obama believes the reason for this civil unrest to be an expected “implosion” of this country’s financial systems. Should these events occur, members of the military would be forced to decide whether they would support their government, which gave hundreds of billions to government cronies in the financial sector, or their country.

A prudent man would speculate if the government so fears coming civil unrest, will they move to seize firearms throughout the country and use these military forces along with law enforcement to do so? I believe the answer can be found in the events surrounding the aftermath of Hurricane Katrina. Government forces there not only seized firearms from private citizens but also relocated many citizens against their will.

Millions of Americans have prayed for the safety of the military as they fight the government’s wars all over the planet. Many believe the military to be defending the country from enemies that would take our weapons and our freedoms. What will their actions be when the US military becomes that enemy? Will the military willingly participate in such acts? Such are questions the future holds.

The government has spent decades defining those who oppose its unlawful exploits as enemies of the state. Those who can or will not differentiate between the government and the country have fallen hook, line and sinker for this demonization of those who demand the government operate within the constraints of the Constitution and moral law. Most of those who blindly support the illegal actions of the government have been bought and paid for with the taxes of those who actually produce something. Unfortunately, primary among those bought-and-paid-for entities are law enforcement and the military.

Both political parties have conducted this demonization of true Patriots. While the democrats have been traditionally anti-gun and liberty, the republicans bought into the program with the fascist Patriot Act and the illegal, unconstitutional War on Terror. The two dominant political parties in this country are two wings of the same vulture: blatant in-your-face socialism. There are no answers to our problems to be found in either political party.

Many on the right have bought into the ideas expressed by leaders of the military that all who oppose the state and its illegal agenda should be treated no differently than the “insurgents” the military has been facing in Iraq and Afghanistan. Nowhere is that better illustrated than here where a law enforcement publication is advocating military tactics promoted by General David Petraeus be used against those whom the state defines as its enemies. While the article in Guns and Weapons for Law Enforcement speaks specifically of gangs and drug activity, don’t forget the Department of Homeland Security has defined millions of patriotic Americans and veterans as possible domestic terrorists in its report sent to LE agencies on April 7th of 2009. If you wonder if you fit the definition of possible domestic terrorist, you should check here.

If the European Union Times report is correct and Obama is moving to strengthen USNORTHCOM with anywhere near the numbers mentioned, indicates the fedgov fears its own citizens much more than it fears al Qaeda. Either the government is anticipating a total financial breakdown, there are plans to confiscate firearms, a new false flag event is in the works, or any combination of the three. Either way, they plan on this event occurring before spring of 2010.
On the minds of many Americans and politicians is exactly how will the military and law enforcement react if told to confiscate firearms or move American citizens to FEMA camps.

Consideration must be given to the militarization of law enforcement entities in this country over the past few decades and our gradual decline into a police state, thanks to the bogus War on Terror. That being said, some police blogs such as this one indicate not all law enforcement personnel are on board with these illegal and corrupt practices. When considering possible actions of military personnel one must be aware of the felons and gang members who became part of the military when recruiters were falling short of their goals. Nothing could be better for a felon or a gang-banger than to actually be ordered to commit crimes with impunity. At some point in time, any true American serving in the military will be forced to ask themselves exactly what and whom they are defending and exactly what became of the “home of the free?”

What will be the reaction of the soldier from Colorado who is confiscating guns and placing so-called domestic terrorists in detention camps in Ohio when he gets word other soldiers are doing the same to his family and friends back home? Who will soldiers and law enforcement officers side with when push comes to shove: the government who has given over a trillion dollars to their cronies in the financial industry, failed to provide their brother/sister veterans competent medical care, denied disability benefits, denied compensation for treatment as prisoners of war, placed single parents in confinement and taken their children, or their family and friends who have lost their jobs and are seeing their homes and farms foreclosed by the same bankers who received huge bonuses from the bailout money? If military and law enforcement personnel begin to side with the citizens, will the fedgov call in United Nations forces to subdue those who cherish personal freedom and will fight to retain it?

Regardless of which series of events occur, Americans will be the losers. Brace yourselves and prepare, this is going to get real ugly.

Michael Gaddy [send him mail], an Army veteran of Vietnam, Grenada, and Beirut, lives in the Four Corners area of the American Southwest.

The information revolution has begun! This is a set of new clips from 2009 exposing the new world order, Barack Obama, and the fraudulent Federal Reserve system. Watch as great American patriots like Alex Jones, Judge Andrew Napolitano, Jeremy Scahill, Jesse Ventura, Dennis Kucinich, Gerald Celente, Peter Schiff and Ron Paul speak truth to power. The information you will see in these clips is still pushed as a minority opinion by the corporate controlled media. You be the judge.

Posted by Robert Reckmeyer at 11:31 AM