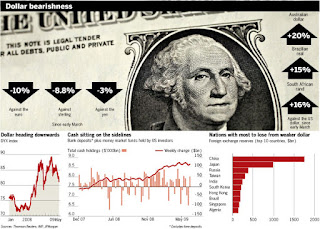 This is not rocket science, this is first year economics. When you create an over supply of money then sooner or later, it will come home to roost. Add in the factor that our currency "was" the reserve currency of the world and we flood the market with U.S. Greenbacks, it is only natural for the currency to be "Worth-Less". In short one can not create money out of nothing and expect it to hold its value, that is impossible.

We have to re frame the nature of our personal and collective reality when using our critical thinking skills to process this current financial meltdown. The Federal Reserve is a Private Partnership involving the richest families on earth, "The Global Elite". They know exactly what they are doing and it is to implode our economy (create the problem) so they can watch us all go to meltdown mode and then they offer their solution. A Global New World Order.

This is The Real War, and it is not between the Muslims and Christians, or the Blacks and the Whites, or the Left or the Right. This war is between the 1% of 1% who own and control everything, i.e. the means of Production, the Money supply, the Corporate Media, the Communication systems, the Military, the Political system, the Food production, Energy, Transportation and now they are coming for each and every one of us. This my friends is do or die.

This war is not fought between standing armies, this war is fought utilizing mind control technologies, economic weapons of war, Fear as tool of manipulation, hunger, false distorted information, political subterfuge, toxic spraying, frequency modulation and manipulation, poison vaccinations, poison additives in the food supply, the list could go on and on................

The Dollar Collapse is only one tool in their arsenal of weapons and it is incumbent on all True Patriots to understand what is truly taking place. This is the Real War. It is the war of all wars because it means both surviving and evolving to a new step on the evolutionary ladder (The Stairway to Heaven) or falling back into a new Dark Age. It is a war between the Super Filthy Rich and all their helpers (Traitors to the Hue-Man Race) 1% of 1% against 6.5 Billion People and we better understand the weapons they are using and the way they twist us, manipulate us and keep us chasing our tails, if we are going to turn this manufactured reality around.

We must empower ourselves with knowledge and press forward with this great work......time is of the essence.

Posted by Robert Reckmeyer at 1:21 PM